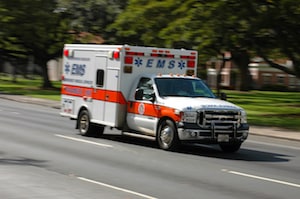 There is a little-known practice called ambulance diversion or hospital diversion. Hospitals began using diversion to address overcrowding issues in their emergency rooms back in the 1980s. Hospitals may use diversion if equipment fails or with an unexpected emergency like flooding or the electricity is out. But now some critics claim the problem is the hospital themselves, with poor and inefficient patient care systems in moving patients through the hospital which causes problems in the ER. As a result, when an ambulance requests to go to a specific hospital during an emergency, the ambulance could be directed to another facility. This facility could be miles away and may not even specialize in your specific type of emergency.

This diversion can have deadly consequences. A female cafeteria worker at the Medical College of Wisconsin suffered a stroke and ultimately died. She was only 350 yards from the nearest hospital emergency room and its top-level stroke center, when she was diverted. She subsequently was treated by two different hospitals, one which could not handle the case, then later arriving at the second hospital three-and-a-half-hours after showing signs of the stroke.

Ambulance diversion often causes overcrowding at other hospitals, leads to delayed medical care for patients, can increase travel time to a care facility, all of which can lead to a patient’s significant permanent injury or death. A review by the Milwaukee Journal Sentinel found that of the 25 largest cities in the U.S., 16 of them including nine of the largest, allow ambulance diversion of some kind, though rules governing when patients can be diverted vary widely.

What we if told you these hospitals were not breaking any laws. Federal law only requires hospitals to treat patients who arrive in their emergency room and make sure they are stable before releasing or transferring them. Fortunately, some communities have voluntarily ended the practice of ambulance diversion. However, until there is some federal regulation or oversight, this practice will most likely continue, to the detriment of the patient.