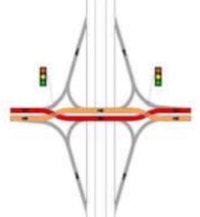 Florida’s highways are often congested and filled with distracted drivers. Now the State will be adding the first of its kind interchanges that will definitely get driver’s attention. Why you ask – because drivers will be required to go on to “the wrong side of the road.”

These new intersections are called Diverging Diamond Interchanges (DDI). They have been in use throughout the US since 2009. Their purpose is to improve safety, reduce congestion, cut potential collision areas in half, allow left turns onto highways and prevent turning into oncoming traffic. DDI’s also assist with pedestrian sidewalks and bike lanes.

The Sun-Sentinel describes how DDI’s work – lanes crisscross over or under highways so all drivers shift from the right lanes to the left lanes and back again. Traffic signals and pavement markings lead drivers through crossover points.

The first such interchange is in Sarasota at University Parkway and I-75 and became operational in May 2017. Florida Today reports that the Florida Department of Transportation (FDOT) has 38 more DDI’s planned or in the works in Palm Bay, Miami and Yulee including on highways like the Dolphin Expressway and I-4. In Broward County a new interchange is being designed for the Sawgrass Expressway at Coral Ridge Drive, Sample Road, Commercial, Oakland Park, and Sunrise boulevards.

Initially the biggest hurdle for these intersections will be driver confusion. Education and public awareness campaigns will be key. It will take some time to collect data to know if these DDI’s reduce collisions and improve traffic congestion.