Filming and Streaming While Driving 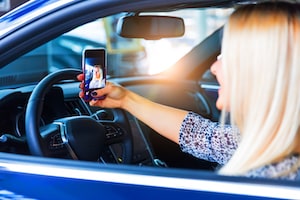 Filming or live streaming while driving is illegal in most states. It is irresponsible and can be deadly. Yet, a 2018 AAA study found that more than half of millennial-aged drivers are aware of the driving dangers but think it is acceptable.

The National Highway Traffic Safety Administration notes that in 2015 alone, nearly 3,500 people were killed due to distracted drivers and nearly 400,000 people were injured.

If a streamer is focused on watching videos, talking with friends, viewers, or even recording an unfolding accident scene, they are taking their eyes off the road and are no longer focused on their driving. They are no longer driving safely and are driving distracted. They could easily veer off the roadway, drive into the on-coming lane, hit a medium, street sign, another vehicle, or even a pedestrian causing serious injury or death. They could also be wasting precious time to aid other victims or call 911 for help.

Many states are rethinking their laws on technology and smart phones usage. States now have to address the functionalities of smartphones. In 2018, Georgia enacted a law that prohibits drivers from streaming videos on their phones while driving. In fact, drivers cannot even hold a wireless device, support one on their body, watch a video or text while driving. Washington has enacted the Driving Under the Influence of Electronics Act. In contrast, Florida just recently made texting while driving a primary offense.

Streaming isn’t only an in issue in the U.S. Europe is dealing with motorists streaming and their footage is ending up on-line within seconds. Videos depict drivers speaking into the camera and watching their screens to see other people or messages and are not focused on driving. Dutch police have even started writing tickets, imposing large fines, and confiscating phones for those drivers who attempt to capture accident scene footage. Police say the drivers are “rubbernecking”, people are getting in the way of police officer’s work, and in some instances onlookers were failing to aid and even save victims. They took video rather than attempt to save a dying persons life.

Distracted driving is pervasive in the U.S. The accidents they cause are on the increase, but they are completely preventable. Everyone now thinks they are a “Consumer Journalist”, they suffer from fear of missing out (FOMO) and they want instant gratification! This behavior is now pushing aside logic and their own safety and the safety of those around them.

With technology rapidly changing, lack of laws, confusion on existing laws, and in some instances, hard to enforce laws, this will continue to be an on-going issue. Hopefully by raising awareness of the dangers of distracted driving especially with those involved in recording and broadcast videos, we can break this cycle. Parents, teach your children that road safety is the responsibility of every driver on the road. You CAN prevent serious injuries and deaths with education on safe driving habits.