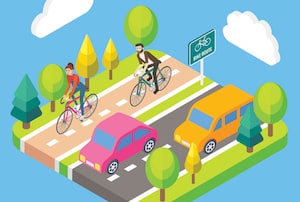 Well its official, the most dangerous state to bicycle in America is Florida. Florida has the highest per-capital bicyclist death rate in the country. Not only did we make top place, we also have four metro areas that are listed in the top four spots of among the 50th largest metro areas. These metro areas include Tampa-St. Petersburg, Jacksonville, Orlando and Miami.

Florida experienced 6.2 deaths per every 100,000 people from 2016-2017, followed by Louisiana at 3.9 and Arizona at 3.5. According to the National Highway Traffic Safety Administration, cyclists killed in motor-vehicle crashes was 840 in 2016 and continues to climb. Deaths have jumped more than 35% since 2010. The leading causes continue to be more drivers on the roadway, higher speed limits, driving under the influence, and distracted driving (cell phone use and texting while driving).

In Florida specifically, many safety officials say that the aging population, the states density, tourism, and unfamiliarity of the roadways are also to blame for an increase in bicycling accidents. Officials believe that the state’s focus of attention on car-centric suburban development also had an impact on the number of bicycling accidents.

Fortunately for those communities that are incorporating bike-share programs, early research is showing a decrease in bicyclist accidents and deaths. There are more than 75 communities that have implemented bike-sharing programs.

Florida is doing its part to improve cycling safety. The Florida Department of Transportation changed its standard width for bike lanes from 4 to 7 feet and now recommends buffered or protected bike lanes. In addition, there are new programs to educate cyclist and motorist, lighting is being improved on roadways used by cyclists, road designs are being improved, and there has been more traffic enforcement. Several Florida cities are implementing Complete Streets. Complete streets are designed and operated to enable safe access for all users, including pedestrians, bicyclists, motorists and transit riders of all ages and abilities.