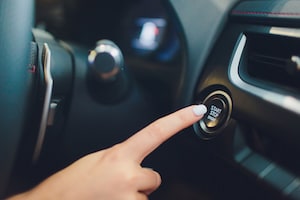 If you purchased a new vehicle in the past few years, you probably noticed a lot of new technology options in the cars and trucks. Much of this technology is to improve safety and to provide comfort and convenience features for consumers. Some technology can put consumers at risk – dashboard options causing driver distractions or vehicles and hybrids that are so quiet consumers are forgetting to turn them off.

A keyless ignition system allows a car owner to start their car without a physical key being inserted into the ignition. Consumers require the use of a wireless fob to get into their vehicle and then to use the start button key on the dashboard to start the car.

The problem is, some consumers are forgetting to turn off their vehicle, by not using the same button to turn off the vehicle. Fatal accidents and injuries have occurred as a result of the keyless ignition systems. There has been an increase in carbon monoxide deaths and injuries when vehicles are not shut down or were accidentally left running when the driver and key fob left the vehicle. This is especially dangerous when the vehicle is parked in a garage. Carbon monoxide, which is colorless and odorless spreads through the home, often for hours, or while one is sleeping, which leads to poisoning and then can cause illness, permanent brain damage, and even death.

Since 2006, a total of 37 people have died and 80 have been injured by carbon monoxide gas after drivers left vehicles with push-button ignitions running in the garage, according to the organization KidsAndCars.org. Seven of these deaths occurred in Palm Beach County, Florida. This led the Palm Beach Sheriff’s office to launch this public service announcement in an attempt to educate and save lives.

Due to consumer complaints and preventable deaths, the National Highway Transportation Safety Administration (NHTSA) has proposed several regulations to make certain types of safety features mandatory for all keyless ignition systems. This includes standardize length of time necessary to push a control to stop a vehicle and audible warnings if one exits the vehicle without turning the vehicle off. Unfortunately to date, no federal rules have been instituted.

A USA Today article reported that in February, a proposed law dubbed the PARK IT Act was introduced in the U.S. Senate. A House version was introduced June 6. The name stands for Protecting Americans from the Risk of Keyless Technology. It seeks the following:

One automaker, Toyota, has agreed to add new technology to push-button ignition vehicles that would allow themselves to turn off automatically after being parked for a period of time. This technology should be available on most of its fleet starting with 2020 model year vehicles. Toyota also plans on adding more audible and visible warning alerts to get drivers attention if they get out of or walk away from the vehicle without turning off the vehicle.

Until these issues are resolved and new safety measures are implemented, NHTSA recommends that vehicle owners read their owner’s manual to learn how to properly use the vehicle’s keyless ignition system. When shopping for a new vehicle do your research and to see if the vehicle is equipped with alarms and safety features to ensure your vehicle is not running or left in gear.