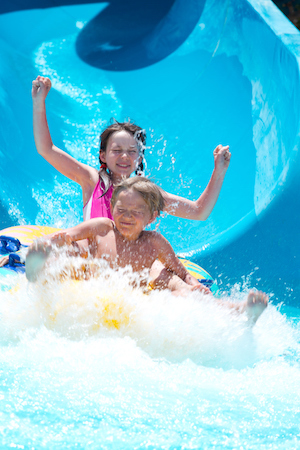 Millions flock to water parks each year to cool off and have fun in the wave pools, meandering rivers, and waterslides. The World Waterpark Association states there are about 1,300 waterparks in North American that attracted 85 million people in 2015. According to the Travel Channel some of the top water amusement parks include Dollywood Splash Country, Schlitterbahn Waterpark, Wet ‘n’ Wild, Legoland, and Six Flags.

How Safe Are Water Parks?

Water parks can pose many safety hazards from shallow water, diving dangers, and drownings, to disease transmission, and slip and falls. While there is no national hard data available for water park injuries, the Consumer Product Safety Commission and the Red Cross collected in 2015 lifeguard training data at waterparks which showed that 4,200 people a year are taken to emergency rooms to be treated for scrapes, concussions, broken limbs, spinal injuries and other such injuries suffered on public waterslides.

Recently a young boy at The Wave amusement park in California was riding a new waterslide called the “Emerald Plunge” before hydroplaning off the ride onto cement. The slide is three-stories-tall, and drops riders at an 80-degree angle before flattening. Fortunately, the child walked away with minor injuries.

You may remember the 2016 incident where a 10-year-old boy was riding the tallest water slide in the world – The Verrukt. It featured a 168-foot plummet, during which riders in three-person rafts traveled as fast as 45 miles per hour. A witness said it appeared the boy was ejected from his seat and slid down the ride. He died suffering a neck injury and decapitation. The ride is slated to be torn down.

As a result of this incident, there has been renewed calls for greater safety oversight of amusement and water parks. So, you may wonder, in light of these incidents and concern for safety – who regulates water parks? The SafeParks website states that amusement ride safety in the United States is regulated through a patchwork of voluntary standards and federal, state, and local laws. Twenty states have government oversight over amusement and water parks, while nine have none at all.

Water parks have a legal duty to provide employees and guests with a safe environment and premises. Some water park accidents result in ligation due to injuries sustained or a death of a loved one. Litigation maybe be the result of the waterpark’s negligence including defective design, defective machinery, poorly maintained rides or buildings, careless or inexperienced ride operators or lifeguards, lack of employee training, inadequate safety equipment, missing or lack of warning signs, slippery or uneven surfaces, polluted water, lack of lighting, and more.

Water park lawsuits are often complex and require an experience attorney. Water parks can be owned and operated by more than one company. The various rides could be owned and or operated by separate companies. Even the employees may have their own personal liability.

How to Stay Safe - Safety Tips

Here are some water park safety tips from the Red Cross to help keep you safe: